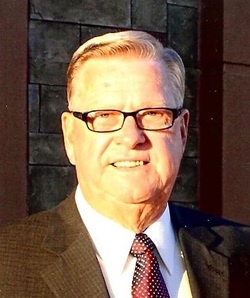 Visitation will be held from 4:00 P.M. to 8:00 P.M. on Friday, November 27, 2015 at the Edwards Funeral Home, 221 East Main in Arcola, IL. Funeral services will be held at 11:00 A.M. on Saturday, November 28, 2015 at the First Baptist Church, 120 East Park Street in Arthur, IL. Rev. John Stewart will officiate. Burial with Military Rites conducted by the Arthur American Legion Post 479 will be in the Arthur Cemetery.

Gene was born on November 15, 1933 in Arthur, IL. He was the youngest child of thirteen born to William B. and Eliza Jane (Hillard) Parrott. He married Glenna Juanita Boyd on August 17, 1958 at the First Baptist Church in Arthur, IL.

Gene was preceded in death by his parents and twelve siblings.

Gene was a 1952 graduate of Arthur High School.

He was an Army Veteran of the Korean War.

Gene was a fifty plus year member of the First Baptist Church of Arthur, IL.

Gene worked at Progress Industries in Arthur, IL for over forty years. After he retired he especially enjoyed yard work. He helped do some farming in the Arthur area and he also served as a taxi driver for some Amish friends.

He was an avid Illini fan and a St. Louis Cardinal fan. He enjoyed boating with his family and friends and spent a lot of time at Lake Shelbyville and Lake of the Ozarks. His greatest joy was spending time with his grandchildren.

Memorials may be made to the First Baptist Church of Arthur, IL or the Arthur Volunteer Fire Department.


To order memorial trees or send flowers to the family in memory of William Parrott, please visit our flower store.