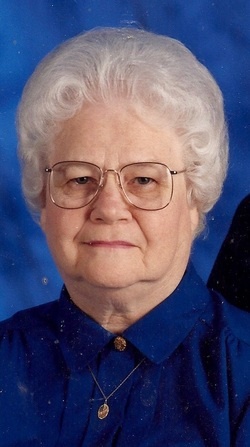 She is survived by one son, Jerry Clark Titus and his wife Sharlene of Arcola, IL.

She was preceded in death by her parents; her husband; one grandson, Brent Clark Titus; one brother, Kenneth Harold Edwards and one sister, Willeva June Ellis

Wanda was a member of the Free Methodist Church in Arcola.

Wanda was an excellent homemaker, decorator and cook, she made the best homemade bread and cinnamon rolls. She enjoyed crocheting and has made numerous afghans. She was an avid gardener and always had fresh flowers on her table; she also did a lot of canning.

Wanda had worked as a switchboard operator; she worked at Colligate Cap and Gown; she worked as secretary and bookkeeper for Diamond Brother’s Insurance, the City of Arcola and for Otto Real Estate. Her last and favorite job was working for Don and Erma Stump at Happy Day’s Antiques in downtown Arcola.

Jerry and Sharlene would like to send many, many thanks to the Arcola Health Care Center and staff for how great they have treated their family over the past four years.

Memorials may be made to the Arcola Health Care Center.

To order memorial trees or send flowers to the family in memory of Wanda Titus, please visit our flower store.