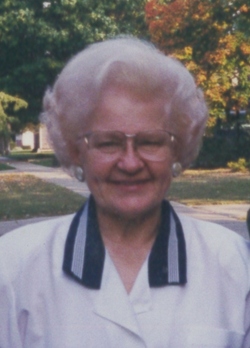 She is survived by one step-son and several nieces and nephews.

She was preceded in death by her parents, her husband Dale, one son, Chad Clark, one infant-son, two brothers, Ralph Case and James Case and two sisters, Eunice Radcliff and Doris Karlstrom.

Thelma was a graduate of Arcola High School in 1940 where she was a member of the Cheerleading Squad.

Thelma had worked at USI, S&K Rigging as a secretary, the Arcola Lumber Yard and Mrs. Moody, her former neighbor at her antique shop.

She enjoyed oil painting, flying high as an ultra-light passenger, feeding her squirrels, visiting with neighbors and people as they would pass by.

Most special to Thelma was portraying Mrs. Santa Claus which allowed her to meet and greet numerous children and their parents and they came to talk to Santa. She was a member of the Arcola First Baptist Church and was the Grand Marshal of the Broom Corn Festival in 2012. Her quick wit and contagious laughter will be missed by those who knew and loved her.

Memorials may be made to the Arcola First Baptist Church or the Arcola Foundation.
To order memorial trees or send flowers to the family in memory of Thelma Clark, please visit our flower store.
Send a Sympathy Card