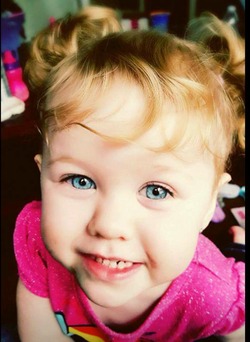 A Celebration of Life visitation will be held from 10:00 A.M. to 1:00 P.M. on Saturday, January 14, 2017 at the Edwards Funeral Home, 221 East Main St, Arcola, IL. The family has requested for everyone who can make it to wear red to remember her because that was her favorite color.

Skailar was born on July 12, 2013 in Urbana, IL. She was the daughter of Gage Wilkerson and Cameille Irene (Hudson) Mendenhall.

Skailar enjoyed playing with Mr. Bunny, chasing butterflies and playing outside. She also enjoyed playing hide and seek, chasing her puppy, giving her babies’ baths, having tea parties, painting people’s finger nails and doing their makeup. She liked playing games with everyone, having sleepovers, watching Peppa Pig, Dora and Paw Patrol, making art, playing with her doctors, nurses and therapists, and she was always there to help anyone that needed help.

To order memorial trees or send flowers to the family in memory of Skailar Mendenhall, please visit our flower store.
Send a Sympathy Card