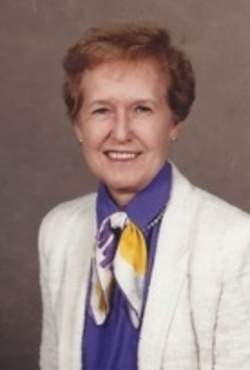 Funeral services will be held at 2:30 P.M. on Friday, June 17, 2016 at the First Christian Church of Mattoon, 1600 Wabash Avenue in Mattoon, IL. Pastor Steven Hayes will officiate. Burial will be in the Humboldt Cemetery. Visitation will be held from 91:30 P.M. to 2:30P.M. on Friday at the Church. The Edwards Funeral Home is assisting with arrangements.

Selma was born on September 11, 1921 in Bond County, IL. She was a daughter of Clarence and Florence (Mueller) Meserve. She married Lloyd Sweeney in 1941. He passed away in 1990.

She is survived by one niece, six nephews and several dear cousins.

She was preceded in death by her parents, her husband, two brothers, Joe and Sam Meserve and her sister Norma Kent.

Selma was very much involved with the Sarah Bush Lincoln Health Center having served on the original Area E-7 Hospital Association Board.

She was a long time member of the First Christian Church of Mattoon.

Memorials may be made to the Sarah Bush Lincoln Regional Cancer Center or to the First Christian Church of Mattoon Development Fund.

To order memorial trees or send flowers to the family in memory of Selma Sweeney, please visit our flower store.