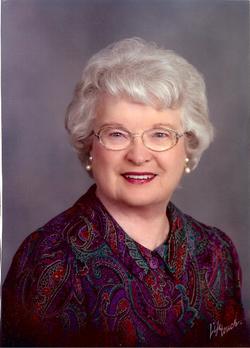 Funeral services will be held at 2:00 P.M. on Saturday, September 19, 2015 at the Edwards Funeral Home, 221 East Main, in Arcola, IL. Rev. Brent Budd will officiate. Burial will be in the Arcola Cemetery. Visitation will be held one hour prior to the funeral. Casual attire would be appreciated.

Sarajean was born on November 21, 1931 in Tuscola, IL. She was a daughter to John and Minnie Dell (Ritchey) Jones.

She was preceded in death by her parents and a sister Eleanor Breedlove.

Sarajean graduated from Arcola High School and Eastern Illinois University before beginning her career as a school teacher. She later became an assistant to her husband Richard (Dick) Winter at a family-owned factory in California.

She and her husband owned a single-engine airplane and loved to fly around the country, using it to come home to Arcola for family visits.

Sarajean was a member of The First Christian Church of Arcola.

Our special thanks to the office staff, nurses and aides at The Arthur Home for their dedication to caring for Sarajean.

Memorials may be made to the Defenders of Wildlife, 1130 Seventeenth Street, N.W., Washington, DC 20036.

To order memorial trees or send flowers to the family in memory of Sarajean Winter, please visit our flower store.