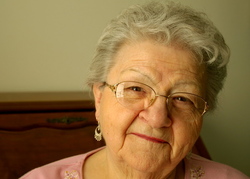 Sarah was the owner and operator of the original Stitch and Sew Fabric store in Arthur and she and Henry owned and operated The Dairyland in Arthur. She was well known for her hospitality, service to others, and her great love for Jesus.

Prior to her death Sarah was the final survivor of her generation of the Levi Chupp family and the Jacob Beachey family.

She had been a long-time member of the Arthur Mennonite Church.

To order memorial trees or send flowers to the family in memory of Sarah Beachey, please visit our flower store.
Send a Sympathy Card