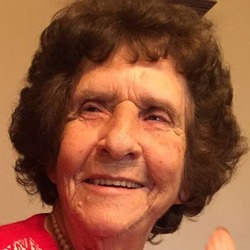 She was preceded in death by, her parents, her husband, four brothers, Sherman, Phil, Jess, and Chuck, three sisters, Mary, Alma and Sue, one still-born brother, and one grandson, Blake Owen York.

She enjoyed gardening and loved her flowers, but most of all she loved spending time with all of her grandchildren.

To order memorial trees or send flowers to the family in memory of Sally Davis, please visit our flower store.
Send a Sympathy Card