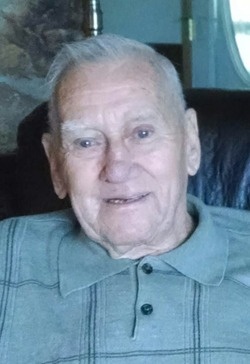 RUSSELL E. “BUD” SANDERS, 89, of Arcola, IL passed away at 3:33 P.M. on Thursday, April 6, 2017 at Carle foundation Hospital in Urbana, IL. In keeping with Bud’s wishes no formal services will be held. The Edwards Funeral Home is assisting with arrangements.

Bud was a member of the Missionary Baptist Church in Arcola, IL, the Eagle’s Club in Mattoon, IL and the Moose Lodge in Mattoon, IL.

Bud farmed with his dad in the Bourbon area for many years. He worked at Young Radiator in Mattoon, IL until they closed in 1986, he had worked there for over 28 years. He helped Irvin Thompson farm off and on for over thirty years.

He enjoyed fishing, hunting, camping and spending time with his family.

To order memorial trees or send flowers to the family in memory of Russell Sanders, please visit our flower store.
Send a Sympathy Card