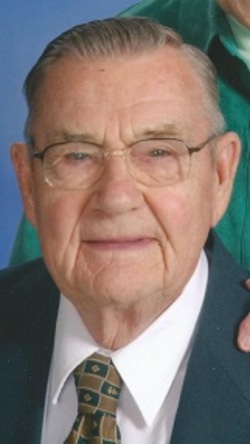 Tom was born on March 13, 1926 in Stollings, West Virginia. He was the son of Willard Delmar Ellis and Hazel (Cooper) Ellis. Tom lived in West Virginia until the age of seventeen when he joined the United States Navy Medical Core and served for 23 months during World War II. While stationed in Great Lakes Naval Station in Chicago, Tom met Charline Groth at a New Year’s Eve party. From that day forward, he wrote her a letter every day. Tom and Charline were married October 12, 1946 in Hammond, IN.

Tom was very active in his community, especially with sports. He refereed multiple games for minor league baseball and basketball. Tom and Charline welcomed one son, Mark Thomas Ellis in 1954. The family would take a fishing trip to either Minnesota or Michigan for vacation every year. Tom also enjoyed hunting quail, turkey and other small game at a family friend’s small farm in Indiana.

After his time served in the Navy, Tom worked at DuPont in East Chicago, IN. After 39 years, he retired as a shift supervisor in 1985 at the age of 59. He enjoyed his last 29 years in retirement. Over the last three decades, Tom enjoyed many hobbies including woodworking and golfing. He created many fixtures that his family uses in their everyday lives. To add to his woodworking, Tom was a talented artist and hand-painted many of his creations to add his own personal touch. Golfing was a highlight for Tom. He could often be found out on the green once or twice a week. In more recent years, Tom was able to share his love of the sport with his son and grandson. The three generations spent their share days out on the golf course together.
Roy felt honored to have his name, Thomas used as a legacy for the Ellis family. It has now been passed down through four generations; Roy Thomas; son, Mark Thomas; grandson, Michael Thomas; and great-grandson, Derek Thomas.

Tom was preceded in death by his parents and one sister Margery Lee Ellis.

To order memorial trees or send flowers to the family in memory of Roy Ellis, please visit our flower store.