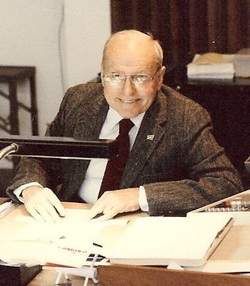 Funeral Services will be held at 11:00 A.M. on Monday, June 30, 2014 at the Presbyterian Church in Arcola, IL. Rev. Donald Winch will officiate. Burial with military rites conducted by the Arcola VFW will be in the Arcola Cemetery. Visitation will be held one hour prior to the funeral at the Church. The Edwards Funeral Home is assisting with arrangements.

Bob was preceded in death by his parents, his wife and two brothers, the oldest who was stillborn and Donald Paul Coombe.

Bob’s parents moved to Arcola, IL from Mt. Zion, IL when he was two years old. Clarence, his father, took over managing a farm South of Chesterville, IL from his uncle Joseph in 1918.

Bob graduated from Arcola High School in 1933. He attended the University of Illinois and majored in Accounting. He worked at the Arcola First National Bank in the summer while attending college. After he and Hester were married he stopped working at the bank to farm and raise his family. Bob had farmed in the Arcola area for several years when his sons took over in the 1970s. He worked at the First National Bank of Arcola, IL for a total of 61 years.
Bob was an Army Air Corp Veteran of WWII having attained the rank of Corporal. While in the service Bob recalled flying in a B-24 from Colorado to Chanute Air Force Base in Rantoul with Don Pullen and seizing the opportunity, they buzzed Arcola.

Memorials may be made to the Presbyterian Church of Arcola or the Arcola Foundation.

To order memorial trees or send flowers to the family in memory of Robert Coombe, please visit our flower store.