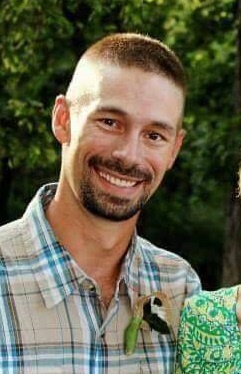 Memorial services will be held at 2:00 P.M. on Sunday, July 12, 2020 at the Arthur Southern Baptist Church.   Rev. Doug Davis will officiate.   Robby’s ashes will be placed in a niche in the Columbarium in the Arthur Cemetery.  Visitation one hour prior to the funeral at the church. The Edwards Funeral Home is assisting with arrangements.

He is preceded in death by his parents, his wife, Darcy Cain and his grandparents.

Robby graduated from Waco High School in Texas.  He was a member of Calvary Baptist Church in Waco, where he participated in youth camps and mission trips.  As a young man, he began developing his skills in construction and engineering on those mission trips by building houses, repairing roofs and digging irrigation ditches.  During his years at Calvary Baptist Church, he displayed a paternal side as he played with children and helped lead Bible schools.

In 2009 he met and fell in love with Darcy and moved to Arthur, IL.  He worked at Masterbrand, CHI and in 2018 he landed his dream job working at Tri-County Welding & Fabrication of Arthur, IL.

Robby enjoyed working at Tri-County welding and spending time with his daughter Lilly.

To order memorial trees or send flowers to the family in memory of Robert Cain, please visit our flower store.