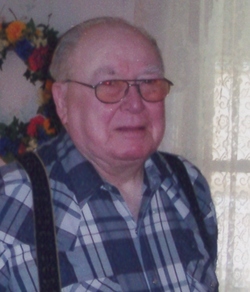 Visitation will be held from 11:00 A.M. to 1:00 P.M. on Thursday, August 11, 2016 at Penn Station, 120 East Progress St. in Arthur, IL. A Graveside Funeral will be held at 2:00 P.M. on Thursday in the Arthur Cemetery. Rev. Wayne London will officiate. Burial will be in the Arthur Cemetery. The Edwards Funeral Home is assisting the family with arrangements.

Robert was preceded in death by his parents, one sister, Clarine Howard and three brothers, Neal Binion, Donald Binion and Hillious “Red” Binion.

Robert was an Army Veteran in WWII.

Robert worked many years at Progress Industries in Arthur, IL, for Lowe Township and he retired from the City of Arthur.

He enjoyed cooking, bowling, trips to Kentucky, and spending time with his family and friends.

To order memorial trees or send flowers to the family in memory of Robert Binion, please visit our flower store.