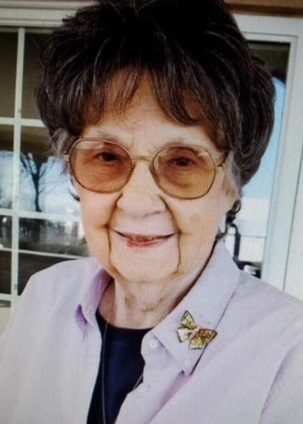 Private services were held on Monday, December 14, 2020 at the Edwards Funeral Home in Arcola, IL.  Burial was in the Oakland Cemetery in Oakland, IL.

Peggy was born on April 19, 1929 in Bloomington, IN.  She was a daughter of Martin Luther and Lottie Jane (Mapes) Temples.  She married Gene Ashmore in Charleston, IL.  He passed away in 1975.  She later married Donald Rhodes.  He passed away in 2016.

She is preceded in death by her parents, both husbands, one son, Michael Ashmore, son-in-law, Brad Hammond, two brothers, Wayne Temples and John Temples, and one sister, Maxine Young.

Peggy was a member of the Arcola United Methodist Church.

She worked as a security officer for the Ziegler Coal Mine in Murdock, IL for several years and later worked at U.S.I.

Peggy enjoyed playing cards, specifically Skip Bo, going on bus tours and trips to the River Boat in Peoria, IL.  She was a huge Chicago Bears fan and U of I Basketball and Football as well.

She loved horses and horse races and enjoyed spending time with her family, especially her grandchildren.

Memorials may be made to Shriners Children’s Hospital.

To order memorial trees or send flowers to the family in memory of Peggy Rhodes, please visit our flower store.