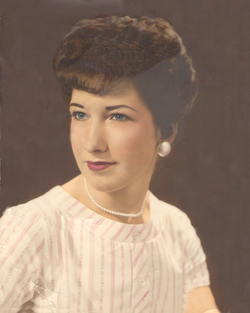 Funeral services will be held at 2:00 P.M. on Saturday, March 19, 2016 at the Mattoon East Side Church of the Nazarene, 2129 South 9th Street, Mattoon, IL. Rev. Robert Warren will officiate. Burial will be in the Dodge Grove Cemetery in Mattoon, IL. Visitation will be held one hour prior to the funeral at the church. The Edwards Funeral Home is assisting with arrangements.

Peggy was born on October 3, 1942 in Mattoon, IL. She was the daughter of George Raymond and Velma (Smith) England. She married Charles Eugene “Gene” Carlyle in Mattoon, IL.

She was preceded in death by her parents, one daughter Gina Walker and two sisters, Betty Jean England and Linda Kronick.

Peggy attended the Mattoon East Side Church of the Nazarene.

She had worked at the Holiday Inn in Mattoon and Decatur for over 20 years. She enjoyed painting, sewing, having made several quilts and reading her bible; she was very close to God and would have really enjoyed a trip to The Holy Land.

She sponsored a child in Africa, she enjoyed listening to the Gaither Band and she enjoyed watching I Love Lucy re-runs. She especially enjoyed spending time with family and friends.

Memorials may be made to the Mattoon East Side Church of the Nazarene.

To order memorial trees or send flowers to the family in memory of Peggy Carlyle, please visit our flower store.
Send a Sympathy Card