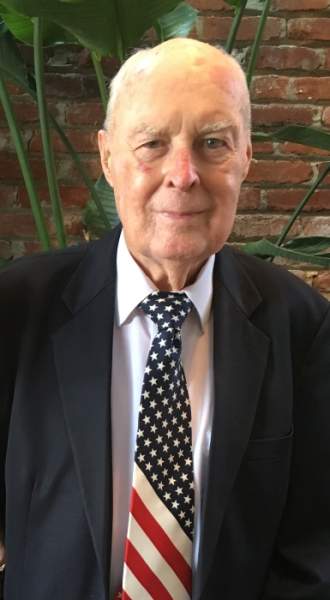 Norman Richard Weller was born on July 4, 1926, in the family farm house, the second of three children, near Hindsboro Illinois, to Charles Mason and Ruth Sabina (Cuppy) Weller. He died peacefully on June 30, 2018 in Austin Texas, with his devoted wife of 70 years at his side, four days short of his 92nd birthday.

Norman grew up helping on the farm through the Depression, was a good student and an excellent marksman with his homemade slingshots. Norman graduated Valedictorian from Hindsboro High School in 1943 at the age of 16 and was awarded a full four-year scholarship to the Citadel, sponsored by the Chicago Tribune. After one year, in July of 1944, Norman left the Citadel and joined the Navy to serve his country during WWII, at the age of 18. He was trained as a signalman and assigned to the merchant ship SS Margaret Lykes, where he served on the open bridge communicating using visual semaphore with flashing lights and flags and was known by his shipmates as “Flags”. Ports of call included Guam, Cuba and South America. During one of his home leaves, he met the love of his life, Joy Ann Rich, a farm girl from neighboring Arcola, Illinois. They wrote letters back and forth until he was discharged in June of 1946. Norman and Joy were married in Arcola on September 19, 1947.  Great Grandfather Cassius Marcelus Clay Weller gave Norman his 1931 Chevy “Old Mini” and the young couple moved to Terre Haute Indiana, where Norman attended and graduated from Rose Poly Tech, with a BS degree in Civil Engineering in 1949. First son, Perry, born in July 1948, attended his graduation. Norman was the first of now eight engineers in his family.

Working as a Civil Engineer, he earned Professional Engineering registration in Indiana, Illinois and Texas. In 1951, they left the snow behind and moved to Houston Texas, where he worked for Brown and Root. Two more sons were born there, Dana in 1953 and Mark in 1955. Life in Houston was good, but with three young boys, wife Joy was homesick for family. Being a devoted husband, the family returned to Illinois in 1956 where Norman worked for US Industrial Chemicals in Tuscola, Illinois, as a Project Engineer.

Norman was dedicated to his family and served his community as a song leader and Elder at the Kemp Church of Christ, on the school board of Arcola High School, on the Steering Committee to establish Parkland College in Champaign, Illinois, and was later elected to the Parkland Board.

In 1968, the family returned to Houston, Texas, and moved into their dream home in Meyerland. Norman worked for Dow Chemical Company as a Project Engineer with numerous assignments in Houston, Freeport Texas, Louisiana and Brazil. He experimented with early retirement at the young age of 55, but that didn’t last long. He soon was called back to Dow as a contractor, working as Project Engineer and Buyer until he finally retired for the second time at the age of 79. During this time, Norman and Joy worshipped at Westbury Church of Christ where he served as a Bible school teacher, song leader and on the school board of Westbury Christian School. Norman was an avid reader, “devoured” the Houston Chronicle and rarely missed Fox News. He was faithful to exercise daily, running and walking on the “track” around Buffalo Bayou.  Norman and Joy loved each other deeply and were content living independently in their Houston home of nearly 50 years until being flooded by Hurricane Harvey in August 2017. They relocated to Austin Texas to be close to family, where they have an apartment at Brookdale Northwest.

Norman will be buried in Arcola Cemetery on July 5, 2018.  Family will meet at Edwards Funeral Home at 10 am to remember Norman and give tribute to a life, well-lived.  Family and friends are welcome to join this gathering.

In lieu of flowers, the family requests that memorials be given in Norman’s name to Westbury Christian School, 10420 Hillcroft St. in Houston, TX 77096.

To order memorial trees or send flowers to the family in memory of Norman Weller, please visit our flower store.