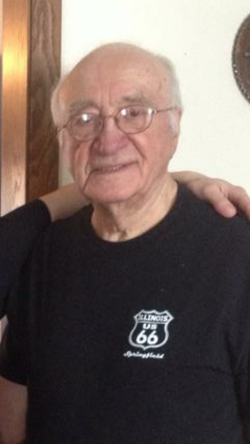 NICHOLAS SPASOJEVICH aka NICK ALEXANDER, 95 of Capron, IL formerly of Springfield, IL passed away at 12:00 A.M. on Sunday, January 15, 2017 at the Arthur Home.

Nick was born on November 24, 1921 in Chicago, IL he was a son of Tomo and Soka (Popovich) Spasojevich.

Funeral services will be held at 4:00 P.M. on Saturday, January 21, 2017 at the Arthur Mennonite Church, 710 East Park Street in Arthur, IL. Pastor Glen Rhodes will officiate. Visitation will be held from 2:00 P.M. to 4:00 P. M. on Saturday at the church. Burial will be in the Poplar Grove Cemetery in Poplar Grove, IL at a later date. The Edwards Funeral Home is assisting with arrangements.

Nick was a Navy Cadet during World War II. He received a bachelor’s degree in communications from Columbia College in Chicago, IL. He worked in radio broadcasting before becoming a News Anchor, “Nick Alexander” for News Chanel 20 WICS in Springfield, IL. He served as Assistant Manager for the Illinois State Fair in 1977 and 1978 and was the Manager of the Illinois State Fair in 1979. He went on to work for the Department of Information Services for the State of Illinois and retired in 1986.

Nick started raising pigeons at the age of 8 and he was a hobby poultry farmer his entire life. This passion grew after he retired. He met many close friends through the buying and selling poultry. Some of his closest friends he met were from the Arthur area, in fact, Nick was said to have an adopted Amish family.

Nick is survived by several nieces and nephews, some of which include, Jo Ann Arnold (Stuart) of Capron, IL, Sandy Ferguson (Michael) of Poplar Grove, IL and John S. Spasojevich of Montgomery, IL as well as great nieces and great nephews, Robert Brandon Mason III, Morgan Patricia Davenport, Michelle Ann Furniss, Kenneth David Richter and John Walter Spasojevich and some local Amish friends who he considered family, Mervin and Anita Gingerich, Kenton and Rhonda Miller and a host of others.

He was preceded in death by his parents, 6 siblings, Thomas Spasojevich, Rose Chuck, Walter Spasojevich, Louis Spasojevich, Ann Gossett and her husband James, and Natalie Dickerson and a great nephew, Daniel James Richter.

To order memorial trees or send flowers to the family in memory of Nicholas Spasojevich, please visit our flower store.