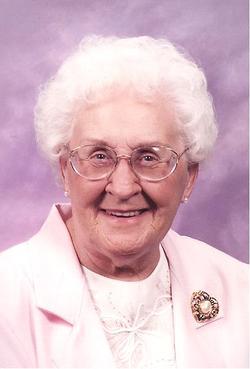 Visitation will be held from 6:00 P.M. to 8:00 P.M. on Friday, March 6, 2015 at the Broadway Christian Church, 1205 S. 9th St. in Mattoon, IL. Funeral services will be held at 1:30 P.M. on Saturday, March 7, 2015 at the Broadway Christian Church in Mattoon, IL. Rev. Greg Sexton will officiate. Burial will be in the Humboldt Cemetery. The Edwards Funeral Home is assisting with arrangements.

She was preceded in death by her parents, husband, brother, John Guill, and sisters, Mrs. (Dewey) Mary Morris and Mrs. (Tink) Wilma Poe.

Minerva went to work at Sears Roebuck & Co in 1961 where she worked for 38 years.

Minerva was a member of the Broadway Christian Church in Mattoon, IL, the Pegtown Chapter of American Business Women’s Association. She Volunteered for Lincolnland Hospice and Sarah Bush Lincoln Health Center.

She enjoyed spending time with family and friends. She will be greatly missed.

Memorials may be made to the Broadway Christian Church.

To order memorial trees or send flowers to the family in memory of Minerva Crossin, please visit our flower store.
Send a Sympathy Card