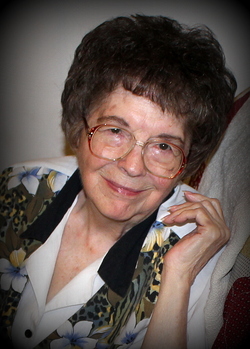 Mass of Christian Burial will be held at 11:00 A.M. on Saturday, September, 19, 2015 at Saint John the Baptist Catholic Church in Arcola, IL. Father Angel Sierra will officiate. Burial will be in the Arcola Cemetery. Visitation will be from 5:00 P.M. to 7:00 P.M. on Friday, September 18, 2015 at the Edwards Funeral Home.

She was preceded in death by her parents, her husband, one son John Michael Tabb, one grandson Tanner Tabb, one brother Fred Frohning and one sister, Ethel Kautz.

She had worked at Robeson’s in Champaign, IL and the Rockome Store in Arcola, IL.

Mildred enjoyed sewing, crocheting and spending time with her family.

Memorials May be made to St. John’s Catholic Church, Altar and Rosary Society.

To order memorial trees or send flowers to the family in memory of Mildred Tabb, please visit our flower store.
Send a Sympathy Card