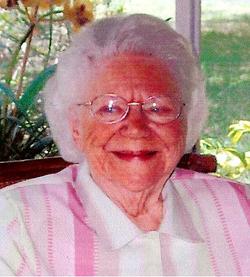 Mildred was born on August 10, 1920 in Coles County, IL. She was a daughter of Thomas Paul and Ethel Elizabeth (Craig) Conlin. She married William Earl Miller on December 25, 1942 in Gainesville, FL. He passed away on November 19, 1997.

She was preceded in death by her parents, her husband, and four brothers, Francis Thomas Conlin, James Glen Conlin, John Paul Conlin and Charles Harold Conlin.

Mildred graduated as the valedictorian from Arthur High School in 1937 at the age of 16. She worked several years as a secretary at Arthur High School. Later in life, she enjoyed working at many places in Arcola and visiting with all of her friends.

Mildred was especially proud of the fact that all eight of her children graduated from college, including several master’s degrees and advanced doctoral study. Over the years, she and Earl frequented sporting events of both their children and grandchildren. No one enjoyed watching the Chicago Cubs, Fighting Illini basketball and Arcola Purple Rider events more than her.

She was a member of Saint John the Baptist Catholic Church in Arcola, IL; the Alter & Rosary Society and had assisted Monsignor Haggarty with several parish tasks.

Mildred will be missed by her family and friends and her memories will be cherished forever. Her family would like to extend a special thank you to all the staff at Mason Point who cared for her the last three and one half years and always took extra special care of “Millie.”

Memorials may be made to Saint John the Baptist Catholic Church.

To order memorial trees or send flowers to the family in memory of Mildred Miller, please visit our flower store.
Send a Sympathy Card