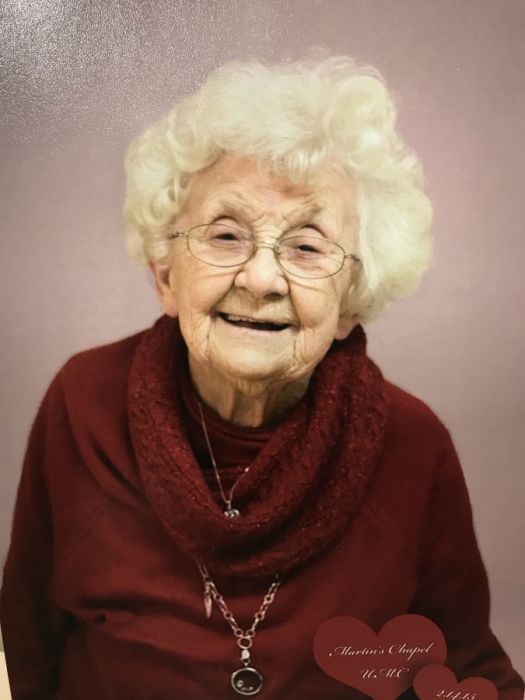 Alice Maxine Goodpasture, 93 of Livingston, TN, formerly of Tuscola, IL passed peacefully from this life on Wednesday evening, July 18, 2018, in the comfort of her home.

Funeral services will be held at 2:00 P.M. on Saturday, July 28, 2018 at the Tuscola United Methodist Church, 901 North Prairie Ave, in Tuscola, IL.  Burial will follow in the Tuscola Cemetery.  Visitation will be held two hours prior to the service from 12:00 P.M. (Noon) to 2:00 P.M. Saturday at the church.  The Edwards Funeral Home is assisting with arrangements.

Maxine was born April 14, 1925 in Sandborn, Indiana (Knox County) to the late John Dennis & Thelma Almeda (Dollens) Anderson. She married the late Gordon Leslie Goodpasture on March 10, 1945 in Washington, IN.

Maxine was a lifelong member of the Methodist Church, currently, Martins Chapel of Allons, TN. In 1999 Alice was honored as Volunteer of the year in Douglas County in Illinois, for her work with senior citizens, especially visiting friends in nursing homes, reading with children in the Tuscola reading program, Pacesetters, devoted mother and grandmother who loved word puzzles, flowers, and dancing.

During her time spent in Tennessee, she was very active member of Martins Chapel, helping with VBS and with their annual dried apple pie frying event every September. Her annual family reunion was a highlight of the year, and as of 2018 she had attended 64 reunions in a row. Also, she was very active at the Overton County Senior Citizens Center for years, considering herself at times to be an unofficial greeter.

Memorial donations in honor of Mrs. Goodpasture may be made to the Martins Chapel Church in Allons, TN.

To order memorial trees or send flowers to the family in memory of Maxine Goodpasture, please visit our flower store.
Send a Sympathy Card