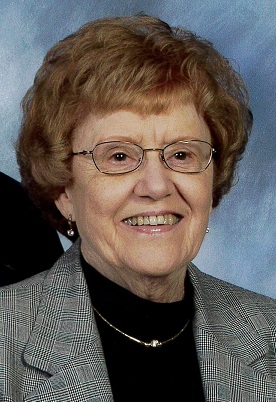 Memorial services will be held at 1:00 P.M. on Saturday, July 6, 2019 at the Arthur United Methodist Church, 128 East Illinois Street in Arthur, IL.   Rev. Leroy Allison will officiate.    Private burial will be in the Arthur Cemetery.   The Edwards Funeral Home is assisting with arrangements.

She is survived by one brother, Bud Dukeman and his wife Pauline of Greenup, IL, one sister, Maudine Barkley of Arthur, IL, a sister-in-law, Ellen Dukeman of Arthur, IL and several nieces and nephews.

She was preceded in death by her parents, two husbands, Donald Creek and Keith Hillyard, and two brothers, James Dukeman and his wife Marge, and John Dukeman.

Mary Ann was a 1946 graduate of Arthur High School.   She went to Chicago right out of High School and took a job at an insurance company for five years.  That is where she met and married Don Creek.   They moved to Sumner, IL, to be close to Don’s parents, and he helped them with their furniture store.   Mary Ann became a Nursing Home Administrator.   Together, they owned and operated nursing homes in Sumner, IL, Effingham, IL, Robinson, IL and Washington, IN.

After marring Keith Hillyard in 1989 they would eventually own and operate Hillyard Ford in Pelham, GA.

Retiring in 1997, Keith and Mary Ann moved to Arthur, IL and enjoyed spending time with family and friends.

To order memorial trees or send flowers to the family in memory of Mary Hillyard, please visit our flower store.
Send a Sympathy Card