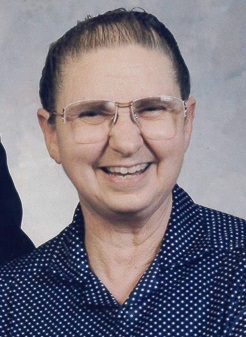 Martha Plank, Arthur IL, age 90, passed peacefully with her children at her bedside on Thursday, August 2, at Arthur Home. Martha was born on November 2, 1927, to Albert and Salome Troyer Gingerich, of Kokomo, Indiana. She and her 3 brothers, Walter, John, and Joe Gingerich, were raised to work diligently and serve God.  Martha met, then married the love of her life, Henry J. Plank of Arthur, Illinois, on November 29, 1949.  For 68 years, she faithfully served alongside her devoted husband in their life's work of raising 4 children and in their pastoral ministry that began at Quinn Chapel Church in Cooks Mills, Illinois, which later became North Vine Mennonite Church in Arthur, Illinois. Henry and Martha also owned and operated the Gospel Books & Music store in Arthur for 46 years bringing their passion for guitars and southern gospel music to the community.

Hospitality was of great importance to Martha and she truly lived up to her biblical name.  Her home cooked meals were a favorite for her own family as well as countless others she and Henry invited into their home. Those meals, served around an expansive dining table large enough to accommodate all of her children and grandchildren, included plenty of mashed potatoes and her signature lettuce salad affectionately known as "Grandma's salad". Martha's grandchildren were very special to her.  With a twinkle in her eye and her memorable giggle, she gladly had M&M's in a special jar, fun-size candy bars, and always there were frozen chocolate chip cookies available—she knew just how to take care of their sweet spot. Allowing her grandchildren to help operate the Bookstore cash register or going next door to Dick's Pharmacy for ice cream was a highlight as well. Martha enjoyed quilting and has lovingly stitched quilts for all of her grandchildren.

Preceding Martha in death are her parents, her three brothers, a great-granddaughter Eliza Bender; 3 brothers in law, and 4 sisters in law. Martha is survived by her husband, her 4 children, 17 grandchildren, and 17 great-grandchildren; brothers and sisters in law: Martha Gingerich, Catherine Plank, and Ada and Reuben Yutzy of Arthur, Illinois, MaryEllen Gingerich of Milford, Indiana, Fran Gingerich of Kokomo, Indiana, Ed Plank of Fresno, California, and Wayne Yutzy of Wooster, Ohio.  Martha's legacy of her love for Jesus, her devotion to family, and her gentle way of caring for others will live on for generations.

Martha’s funeral service will be held at 10:00 A.M. on Saturday, August 4, 2018 at the North Vine Mennonite Church, 312 N. Vine Street in Arthur, Illinois. Pastor Brian Petersheim and Pastor Mike Helmuth will officiate. Burial will follow in the Arthur Cemetery.  Visitation will be held on Friday, August 3, 2018 from 2:00 PM to 4:00 P.M. and from 6:00 P.M. to 8:00 PM at the North Vine Mennonite Church. The Edwards Funeral Home is assisting with arrangements.

To order memorial trees or send flowers to the family in memory of Martha Plank, please visit our flower store.
Send a Sympathy Card