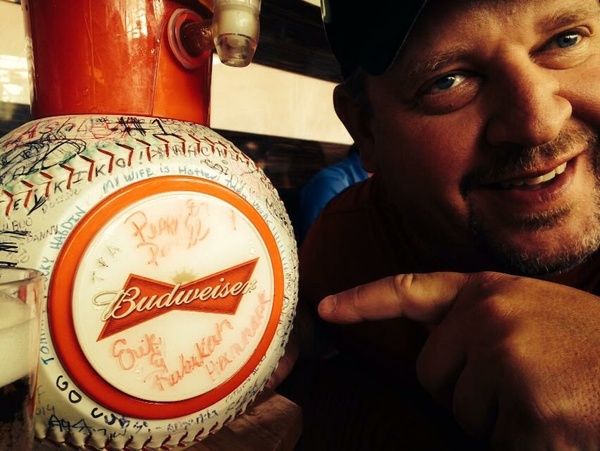 He is survived by his wife, Stephanie and their two sons, Conner and Paven. He is also survived by his parents, Corky & Billiejean, and his three brothers and their families: Bryan & Angie and their three daughters Kylee, Lexee and Laynee as well as a son-in-law Derrick Herschberger and granddaughter Raegan; Brad & Kristi and their kids Kaylie and Brady; and Butch & Lindsey and their son Owen; as well as his father-in-law and mother-in-law, Jim & Diane Conner; and his brother-in-law and sister-in-law, Craig & Shayna Conner and their children Ariella and Jameson.  Mark will be remembered by his grandmother Maxine Arthur as well as his many aunts, uncles and cousins.

Mark was a 1988 graduate of Arcola High School, a 1992 graduate of Southern Illinois University with a BS in Speech Communications, and a 2003 graduate of Rockford College with a Masters of Arts in Teaching.  Mark worked 6 years at Galatia Mine as an underground coal miner, 6 years at Rend Lake College as a Speech Teacher and Specialist in Cooperative Education and Employment Services, 11 years as HR for Peabody Mines and 1 ½ years as HR at Doe Run.

Mark was an avid player of Candy Crush and a hardcore fan of the Cubs, despite his wife’s love of the Giants and Cardinals.  As a boy, Mark was happy showing sheep with his 4H Club.  More recently he enjoyed watching his sons play in their sports, spending time with his family, fishing at the lake, watching NASCAR, and relaxing and savoring life his way.

Mark will be remembered as the world’s best husband, father, brother, son and friend.  He rarely met a stranger who didn’t quickly become a friend.  He was often razzed by his brothers for his cutoff T-shirts, neon sunglasses, and Nike flip flops.  Mark will be dearly missed by both family and friends.

In lieu of flowers, donations may be made to: Benefit of Paven and Conner Clark at Central Bank of Lake of the Ozarks, PO Box 207, Osage Beach, MO 65065; Attn: Heather Snyder.

To order memorial trees or send flowers to the family in memory of Mark Clark, please visit our flower store.