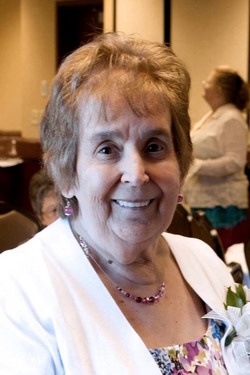 Marian was born on June 1, 1939 in Bryant, Indiana. She was the daughter of William Darwin and Blanche Opal (Ebersole) Butcher.

She is survived by four sons; Michael Lee and his wife Lynn of Spring City, TN, Nolan Lee and his wife Cindy of Arthur, IL, Shawn Lee and his wife Jennifer of Lino Lakes, MN, and James Lee and his wife Regina of Toledo, IL; two daughters: Marcia Spear and her husband Bobby of Arcola, IL, and Joyce Lee of Peoria, IL; twenty-three grandchildren; one great-grandchild; one brother, James Butcher and his wife Patricia of The Villages, FL; one step-sister, June Smith of Bryant, IN; one sister-in-law Wanda Butcher of Angola, IN and one daughter-in-law Tina Lee of Hindsboro, IL.

She was preceded in death by her parents, one son Nathan, Lee, two brothers, William and Paul Butcher her step-mother, Edith Butcher and her Aunt Bernadine Houser who was like a mother to her.

Marian worked as a Data entry operator for banks and insurance companies for many years.

She liked sewing and reading, and she was a member of the Peoria Christian Fellowship.

To order memorial trees or send flowers to the family in memory of Marian Lee, please visit our flower store.
Send a Sympathy Card