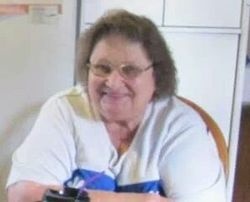 Marge was born on April 13, 1938 in Racine, WI. She was a daughter of Steven Douglas and Helen (Svaboda) Miller. She married Dean Edwards on October 18, 1974 in Charleston, IL.

She was preceded in death by her parents, one brother, George Miller, and one sister, Bernice Miller.

Marge retired from Cap and Gown in Arcola in 1982.

She enjoyed playing Bingo, working cross-word puzzles, going to garage sales, she had been an avid bowler and she really enjoyed spending time with her family, especially her grandchildren and great-grandchildren.

Memorials may be made to Easter Seal or St. Jude Children’s Research Hospital.

To order memorial trees or send flowers to the family in memory of Margaret Edwards, please visit our flower store.