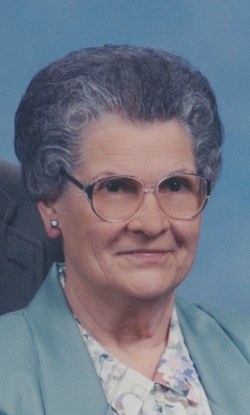 Funeral services will be held at 12:00 P.M. (Noon) on Saturday, July 30, 2016 at the Walnut Grove Christian Church, 12930 East CR 1700 North, Arcola, IL. Pastor Steven Stern will officiate. Burial will follow in the Arcola Cemetery. Visitation will be held from 10:00 A.M. to 11:45 A.M. on Saturday at the Church. The Edwards Funeral Home is assisting the family with arrangements. To leave an online condolence, please visit www.edwardsfh.net.

Mardelle, daughter of Raymond and Beulah (Stortzum) Bugh was born on June 16, 1920 in Arcola, IL. She attended school in Arcola, graduating from High School in 1938. She worked as a telephone operator for 5 years for the Arcola Telephone Company and Illinois Consolidated Telephone Company.

Memorials may be made to the Walnut Grove Christian Church or the Arcola Public Library.

To order memorial trees or send flowers to the family in memory of Mardelle Blagg, please visit our flower store.