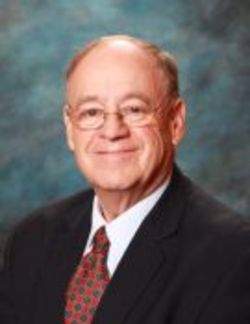 He is survived by his son, Duane Boyd and his wife Kelsi of Champaign, three grandchildren, Brody, Gwenn and Taylor Boyd, and three sisters, Juanita Parrott of Arthur, IL, Phyllis Baker and her husband Wally of Pryor, OK and Becky Hausmann and her husband Dave of Wagoner, OK.

He was preceded in death by his parents, his daughter, Gwen Marie Boyd and one sister, Karen Schultz, one infant brother, Duane Glenn Boyd and two brothers-in-law, Stanley Schultz and Gene Parrott.

Mac was a 1961 Graduate of Arthur High School. He served in the Illinois National Guard and Army Reserves. He graduated from the University of Illinois in 1974 with a Bachelor of Science in Agriculture Economics.

Mac was a member of St. John Baptist Catholic Church in Arcola, IL and the Arcola Sunrise Rotary Club.

Mac has been a Real Estate Broker since 1975 he opened his own brokerage office, Boyd Real Estate, Inc. in Arcola, IL in 1978, now doing business as Farmers National Company. For the past 41 years Mac has devoted much of his time and energy to the real estate industry. He has won numerous awards served on several boards and committees and has even been inducted into the Illinois as well as the National Realtors Hall of Fame.

Mac was an Illini Fan and a St. Louis Cardinal Fan.

One of Mac’s greatest accomplishments was being a dad to Gwen and Duane but nothing compared to being a grandpa, this was Mac’s favorite role in life. Spending time with his grandchildren is something he always looked forward to.

Memorials may be made to the Gwen Boyd Memorial Fund at the First National Bank of Arcola, 127 S Oak St, Arcola, IL 61910.

To order memorial trees or send flowers to the family in memory of Mac Boyd, please visit our flower store.