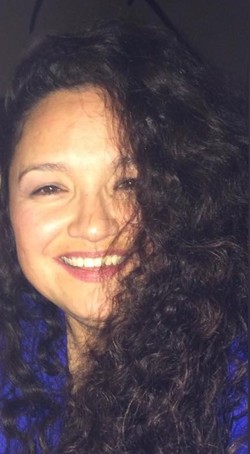 A celebration of Lupe’s life will be held at 3:00 P.M. on Saturday, August 13, 2016 at the Arcola Community Center, 107 West Main St. in Arcola, IL. Rev. Ivan Jess will officiate. A visitation will be held from 12:00 P.M. (Noon) until service time on Saturday at the Community Building. The Edwards Funeral Home is assisting with arrangements.

Lupe was born on September 4, 1973 in Tuscola, IL. She is a daughter of Tomas R. and Francisca (Lopez) Gonzalez. She married James Walter Thorne on June 5, 1993 in Las Vegas, NV.

She is survived by her husband Jim Thorne of Mattoon, IL, one daughter, Jordan Thorne of Champaign, IL, two sons, Greg and Lance Thorne both at home; her father, Tomas R. Gonzalez of Cadereyta, Mexico; two brothers, Tomas A. Gonzalez of Arcola, IL and her twin brother, Encarnacion Gregorio “Chon” Gonzalez and his wife Karen of Decatur, IL; two sisters, Francisca M. Montelongo and her husband Orlando of Arcola, IL and Ana Lindstrom and her husband Pat of Hammond, IL; one grandmother, Maria Guadelupe Garza Reyes of Las Trancas, Mexico and several nieces and nephews.

Lupe was preceded in death by her mother.

Lupe grew up in Arcola, IL. She graduated from Arcola High School in 1991. After High School she traveled to California with her sister Ana and California is where Lupe met her husband, Jim, of 23 years. In 2000 Lupe and Jim moved to Arcola, IL to raise their three children, as their two sons approached High School Lupe and Jim moved to Mattoon, IL so Greg and Lance could play Soccer; Greg is now a senior and Lance is a freshman. Lupe was a die-hard soccer Mom. She was always taking pictures of the team, cheering on her kids and their teammates; hollering “get on the ball”. No one will ever forget her smile or her unforgettable laugh.

To order memorial trees or send flowers to the family in memory of Lupe Thorne, please visit our flower store.
Send a Sympathy Card