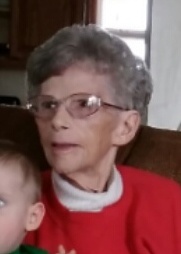 Funeral services will be held at 11:00 A.M. on Saturday, June 3, 2017 at the Arthur Southern Baptist Church, 530 North Vine St, Arthur, IL.  Pastor David Babb will officiate.  Burial will follow in the Arthur Cemetery.  Visitation will be held one hour prior to the funeral from 10:00 A.M. to 11:00 A.M. at the church.  The Edwards Funeral Home is assisting with arrangements.

She was preceded in death by her parents, a stillborn daughter, Glenda Lou Stanford, one grandson, Jake Stanford, one brother, Bill Eblin, and two sisters, Olive Eblin and Odetta Weems and one stillborn brother.

She started the Girl Scouts in Arthur when her daughter was at a young age.  She sewed many dresses for her daughter and gifts for many others. She enjoyed sewing, gardening and spending time with her grandchildren and great-grandchildren.

LulaBelle helped open and worked at the Calico Workshop until 2015 with 37 years of service.

Memorials may be made to the family to help with funeral expenses.

To order memorial trees or send flowers to the family in memory of LulaBelle Stanford, please visit our flower store.
Send a Sympathy Card