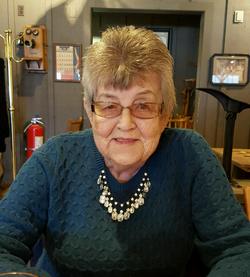 She was preceded in death by her parents, her husband, Carl Suding, an infant child, one sister, Rita Lawrence and one brother, William Loechle.

Loretta was a member of St. John the Baptist Catholic Church in Arcola, IL, the Moose in Tuscola, IL, and the Eagles in Mattoon, IL and Batesville, IN.

She enjoyed camping, fishing, gardening, canning, crocheting, puzzles and playing cards. She was an excellent cook. She enjoyed trying new recipes and creating some special meals of her own. She kept her family well fed, especially the boys. Her favorite pastime time was spending time with her family, especially her grandchildren.

Memorials may be made to the Douglas County Animal Shelter.

To order memorial trees or send flowers to the family in memory of Loretta Suding, please visit our flower store.
Send a Sympathy Card