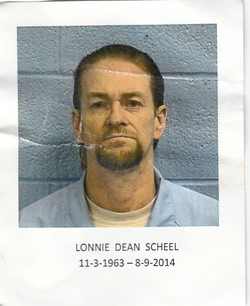 Graveside funeral services will be held at 10:00 A.M. on Tuesday, August 26, 2014 at the Evergreen Memorial Cemetery in Bloomington, IL. The Edwards Funeral Home is assisting with arrangements.

Lonnie was preceded in death by his parents, and infant son, Warren Brice Scheel one brother, Owen Romaine Scheel and one sister Schantelle Scheel.

Lonnie had been a chef for many years. He was an artist, and a drummer, and played in many area bands.

To order memorial trees or send flowers to the family in memory of Lonnie Scheel, please visit our flower store.
Send a Sympathy Card