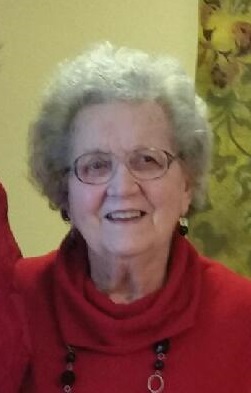 Funeral services will be held at 2:00 P.M. on Sunday, September 30, 2018 at the Arcola United Methodist Church, 121 South Locust Street.  Pastor Matthew Stump will officiate.  Burial will follow in the Arcola Cemetery.  Visitation will be held one hour prior to the funeral from 1:00 P.M. to 2:00 P.M. at the church.  The Edward Funeral Home is assisting with arrangements.

She was preceded in death by her parents; two husbands; one daughter-in-law, Susan Cline; one step-son, Mark Hunter; a great-great-granddaughter, Emily Perry; and six brothers.

She was a member of the Arcola United Methodist Church, Arcola Faith Circle, the Tuscola Eastern Star and Twilighter H.E.A.

Bill and Lola owned and operated Cline Kennels for several years.   Lola served as the bookkeeper for the Arcola Record Herald and retired after 10 years of service.

Lola collected dolls and thimbles.   She and Joe had served as Grand Marshals for the Arcola Broom Corn Festival and she and Joe enjoyed traveling in their retirement years.

Memorials may be made to Arcola United Methodist Church.

To order memorial trees or send flowers to the family in memory of Lola Hunter, please visit our flower store.
Send a Sympathy Card