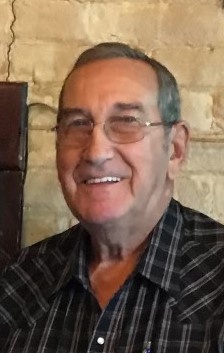 Lloyd was born on August 8, 1933, in Macon Co., IL. He was a son of Raymond and Thrissia (Elam) Johns. He grew up near Arcola, was a 1953 graduate of Arcola High School and went on to serve his country in the Army from 1953 to 1955. Lloyd and Virginia “Ginny” (Dague) Johns were united in holy matrimony in 1952 and were blessed with 69 years of marriage. Gin, as he called her, was the absolute love of his life and best friend. They were inseparable. Together, they were blessed with four children:  Robert, Steve, Jeff, and Doug.

Lloyd began his farming career with his father, Raymond after returning from his military service. When his father passed, he began farming on his own and later he farmed with his brother, Lyle. He never turned away from hard work or trying to do the right thing; a legacy he instilled in his family.

In the 1990’s, Lloyd and Virginia moved to Oakland, IL where they purchased land and built a new home for their retirement. Although Lloyd retired from farming, he never gave up his love of the land, spending endless hours tending to his woods. Prior to retirement, he served on the Arcola School Board, Soil Conservation Board, Habitat for Humanity, and at Mt. Gilead United Methodist Church. After they moved to Oakland, they attended Oakland Christian Church. Lloyd always made time to lend a hand to those who needed it.

He enjoyed family, flying, fishing, hunting, playing golf, and woodworking. In their retirement years, Lloyd and Ginny escaped the Central Illinois winters in favor of Brackettville, Texas where they reconvened annually with life-long friends at Fort Clark. Lloyd had an adventurous heart and a love of family and God, setting an example for his children and grandchildren. One could say, he experienced life and left little undone; he flew airplanes, he raised and trained horses, built an airplane with his buddy, Bob, and landed an acting part as a cowboy in a western movie. He also enjoyed his many conversations with friends around Oakland and many other places along his life’s journey.

Lloyd was preceded in death by his parents; a son, Robert Johns, one brother, Harold Johns and two sisters, Betty Guth and Barbara Gibson.

Memorials may be made to the Oakland Christian Church or the American Cancer Society.

To order memorial trees or send flowers to the family in memory of Lloyd Johns, please visit our flower store.