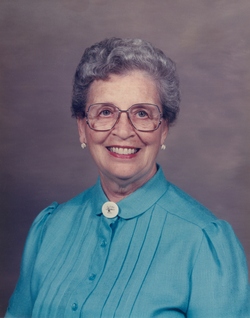 She was preceded in death by her parents, her husband of 74 years, and two sisters, LaVonne (Guess) Schneider and Betty (Guess) Paris, Brown.

LaVerne grew up in Manchester, IA. She graduated from Manchester High School in 1938. After graduation she worked at the Farmers and Merchants Bank in Manchester before her marriage; she then worked with her husband on their family farm.

She was active in The National Grange of the Order of Patrons of Husbandry, becoming the first woman master of the Iowa State Grange and was an active participant in her church women’s groups.

LaVerne was a member of the Eastern Star, Audubon Club, Tourist Club, and the Lend-A-Hand Neighborhood Club, serving in various leadership roles. She volunteered in a variety of capacities and served as a census taker manager.

She was a member of the Zion United Church of Christ in rural Arthur, IL. She enjoyed spending time with family and friends, tatting, knitting, playing her piano and organ, letter writing, crocheting, genealogy, playing cards, fishing and entertaining. She was an amazing cook.

Memorials may be made to Lincolnland Hospice of Sarah Bush Lincoln.

To order memorial trees or send flowers to the family in memory of LaVerne Appleby, please visit our flower store.
Send a Sympathy Card