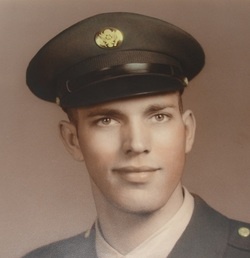 Larry graduated from Pittsfield High School, Pittsfield, IL. He served his country for two years in the U.S. Army and upon his discharge received a Letter of Appreciation from his Captain. For many years, he owned and operated the Dissman Construction Company. Larry was well known for his hobby of restoring vintage Mustang automobiles.

He was preceded in death by his wife, Jean, and parents, Cecil (Bill) and Bessie (Nott) Dissman.

The family wishes to thank all of the staff at the Arcola Health Center for their loving, attentive care.

Graveside memorial services was held at 11:00 A.M. on Saturday, May 3, 2014 at the Villa Grove Cemetery across from the High School in Villa Grove, IL. Rev. Duane Piercy officiated. The Edwards Funeral Home assisted with arrangements.

Memorials may be made to the Arthritis Foundation (www.arthritis.org).

To order memorial trees or send flowers to the family in memory of Larry Dissman, please visit our flower store.