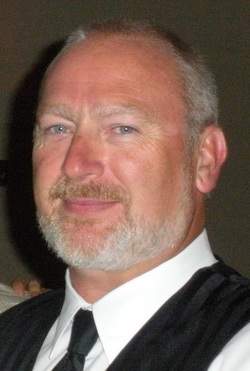 A celebration of Kevin’s life will be held at the Arcola Fire Station on Saturday, January 25, 2014 from 1:00 P.M. to 5:00 P.M. with a memorial service starting at 3:00 P.M. Rev. Kenny Cripps will officiate. In lieu of flowers memorials may be made to Kevin’s family.

Kevin was born on January 15, 1962 at Jarman Hospital in Tuscola, IL. He is a son of Richard Wayne and Mary Belle (Fulton) Smith. He married Carolyn Darlene Connour on March 26, 1983 in Arcola, IL.

Kevin graduated from Arcola High School in 1980 where he played football on the 1978 state championship team.

Over his lifetime he held several different positions, from welder to farmer. For the past 18 years he has been employed at the Union Pacific Rail Road as an Engineer.

Kevin had been a Boy Scout Leader, baseball coach and JFL football coach. His hobbies mostly involved being outdoors doing things like mushroom hunting, boating, camping, sitting around a campfire and motorcycle riding.

He really enjoyed spending time with his family and friends especially his granddaughter who referred to him as Papa Kevin.


To order memorial trees or send flowers to the family in memory of Kevin Smith, please visit our flower store.