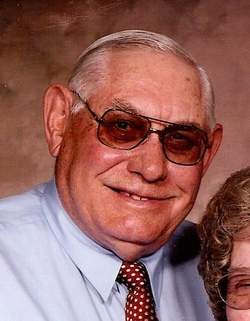 Kenneth was born on September 13, 1927 in Woodson, IL. He was a son of Kenneth Elmer and Anna Elizabeth (Cruzan) Ruble. He married Eva Louise Grove on August 24, 1948 in Manteno, IL.

He was preceded in death by his parents, a daughter Carol Ann Ruble and one brother, Robert Ruble.

Kenneth was an Army Veteran of the Korean War.

Kenneth was retired from the Illinois Department of Mental Health as an Operating Engineer with over 37 years of service.

He was a member of the Humboldt United Methodist Church, Manteno Masonic Lodge, and the Mattoon VFW.

He enjoyed golfing, fishing, camping and spending time with his family.

Memorials may be made to the Humboldt United Methodist Church.

To order memorial trees or send flowers to the family in memory of Kenneth Ruble, please visit our flower store.