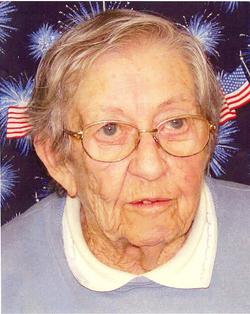 She was born to Earl and Marguerite (Reasor) Heinlein of Hindsboro, IL on December 23, 1915. She graduated from Hindsboro High School and then earned her registered nursing degree from the Illinois Masonic Hospital in Chicago, IL.

Katie became an RN at Illinois Masonic Hospital and helped treat such Chicago sports notables as Bill Osmanski of the Bears and Dizzy Dean of the Cubs.

In 1942, she enlisted in the U.S. Army and became a 1st Lieutenant as an army nurse. Her campaigns included the invasion of New Guinea and the liberation of the Philippines.

She married Jack Brandenburg on March 4, 1951 in Hindsboro, IL and they lived on the family farm in Arcola IL for many years. After marriage, Katie settled into farm life. She canned, froze, jellied, preserved or baked all that she grew in the garden. She was also an excellent quilter, knitter, crocheter, needle pointer, and seamstress. She passed along many of these skills to others as leader of the Friendly 4H’ers club. She was also a Cub Scout Den Mother and raised two Eagle Scouts. She also greatly enjoyed the many family vacations to Birch Lake, in Hackensack, MN.

Katie was a frequent visitor to the Arcola Public Library and served on the Library Board. She was also an avid genealogist.

After Jack’s passing in 1997, Katie lived by herself in Arcola, in Assisted Living in Murphysboro, and in the Illinois Veteran’s Home in Anna, IL. She was always grateful for the tremendous support she received from wonderful caring neighbors and staff.

In lieu of flowers, the family requests that donations be made to the Arcola Public Library.


To order memorial trees or send flowers to the family in memory of Kathryn Brandenburg, please visit our flower store.