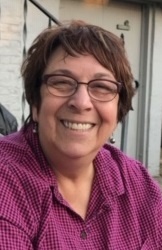 Judy married Mark on April 29th 1978 in the Immaculate Conception Catholic Church in Mattoon, IL.  After several relocations throughout the Midwest, Judy and her family settled in Arcola in 1999.  Judy was intensely involved in her community.  She was a longtime member and past-president of Arcola Sunshine Rotary, an enthusiastic participant in the Arcola Beautification Committee, and a key contributor to the Walldogs murals project, the annual Arcola car show, Arcola’s Rotary Park and many other community projects during her twenty years in Arcola.

While also raising her family, Judy had several jobs throughout the years. She most enjoyed her more
than 19 years in client service as the ‘smiling face’ at Boyer and Sappenfield Investment Advisors of Arcola.

Judy was best known for her inexhaustible and highly infectious good-nature, optimism, and kindness.  She was highly devoted to her grandchildren.

Private services will be held and burial will be in the Arcola Cemetery.   The Edwards Funeral Home is assisting with arrangements.   A rip-roaring public celebration of Judy’s life will be held when America returns to normal.

In lieu of flowers, memorials may be made to Arcola Sunrise Rotary c/o Edwards Funeral Home, Arcola.

To order memorial trees or send flowers to the family in memory of Judith Smith, please visit our flower store.
Send a Sympathy Card