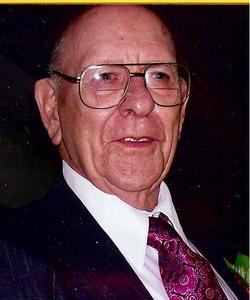 Visitation will be held from 5:00 P.M. to 7:00 P.M. on Friday, March 6, 2015 at the Edwards funeral Home 221 East Main in Arcola, IL. Funeral services will be held at 11:00 A.M. on Saturday, March 7, 2015 at the Edwards Funeral Home. Rev. Donald Winch will officiate. Burial with Military Rites conducted by the Arcola VFW will be in the Arcola Cemetery.

Joe proudly served in the Navy from 1942 to 1947 and received many service medals.

He was a member of the Arcola VFW.

Joe worked as a mechanic for over 50 years. He started working as a mechanic for King Brothers in Arcola in 1948 and later for Everett Kerns Massy Ferguson in Tuscola and then Century Motors in Tuscola. In 1959 Joe became self-employed and operated a shop out of the old Clyde Linville garage located in the alley at 217 West Jefferson Street in Arcola. In 1969 he moved his Garage to the corner of Rt. 45 and Jefferson Street in Arcola where he obtained an American Motor Corporation dealership. Joe retired 1986. After he retired he continued to work half days at the garage for 12 more years.

On July 21, 2009 a bus load of Arcola residents, friends, and family accompanied Joe to the Thompson Center in downtown Chicago. He was awarded the French Legion Medal of Honor by the Government of France for his valor during World War II. In 2012 he was honored with a Wall Dog painting on the side of the Rockome Store in Arcola. It is simply titled “He’s Not Your Average Joe”.

Joe’s favorite things to do were drink coffee with his friends and spend time with family.

To order memorial trees or send flowers to the family in memory of Joseph Ernst, please visit our flower store.