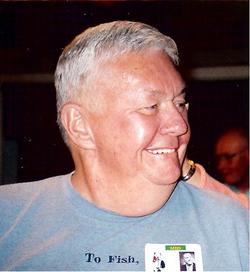 A casual celebration of Joe's life will be held from 2:00 PM to 4:00 PM on Sunday, June 29, 2014 at the Lifespan Center, 11021 East County Road 800 North in Coles County. The Edwards Funeral Home is assisting with arrangements.

Joe was preceded in death by his parents, one son Randy Bush and one granddaughter, Whitney Michelle Sharp.

He owned and operated Joe’s Tap in Mattoon, IL for over 35 years.

He always enjoyed crappie fishing with his lifelong friend Dick Cunningham. They always had a friendly competition while fishing, keeping close tabs on who caught the first, the biggest and the most crappie. Joe and Dick also played a lot of “Hit and Spread”. Joe also enjoyed spending time with his family, his friends and his dog, Cody.


To order memorial trees or send flowers to the family in memory of Joe Bush, please visit our flower store.
Send a Sympathy Card