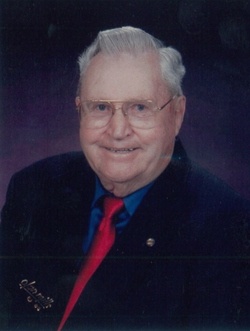 Funeral services will be held at 11:00 A.M. on Wednesday, August 17, 2016 at the Walnut Grove Christian Church, 12930 East CR 1700 North, Arcola, IL. Dr. Barney Wells will officiate. Burial with Military Rites conducted by the Charleston VFW Post 1592 and will be held in the Mound Cemetery in Charleston, IL. Visitation will be held two hours prior to the service on Wednesday from 9:00 A.M. to 11:00 A.M. at the church. The Edwards Funeral Home is assisting with arrangements.

Jesse was born on August 9, 1923 on the family farm in Charleston, IL. He was a son of Jesse Edward and Grace Loraine (Nichols) Babbs. He married his high school sweetheart, Bonnie Ruth Endsley on October 31, 1945 in Charleston, IL. They celebrated 32 years of marriage. She passed away on March 9, 1977. He later married Mildred J. Dennison on March 25, 1978 in Oakland, IL. They have been married for 38 years.

He was preceded in death by his parents; his first wife, Bonnie; one sister, Virginia Monts; one brother, John Babbs; two granddaughters, Amanda "Mandi" Litteken and Heather Babbs and one step-son, Greg Dennison.

Jesse graduated from Humboldt High School in 1941 and was a Navy Veteran of WWII proudly serving his country from 1941 through 1945.

Jesse was a faithful, life-long member of the Walnut Grove Christian Church as were his parents. Farming was his passion from a young boy until he retired at the age of 84 in 2007. His amazing work ethic inspired many and his love of family was unsurpassed. He inherited his mother’s remarkable baking talents and family, friends and neighbors were recipients of his generosity as he shared his home made noodles, light rolls, smooth ice cream and creamy caramels. All who knew him appreciated his tremendous sense of humor and his loyalty to his family and friends.

Memorials may be made to the Walnut Grove Christian Church or the Alzheimer’s Association.

To order memorial trees or send flowers to the family in memory of Jesse Babbs, please visit our flower store.
Send a Sympathy Card