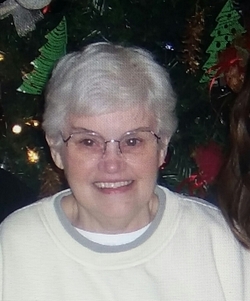 Inez was born on February 24, 1937 in Tompkinsville, KY, in the hills and hollers of Monroe County. She was a daughter of Tobacco Farmer, Cordell Hull and Myrtle Elizabeth (Crowe) Gray. She married Stanley “Bud” Smith on October 27, 1956 in Argenta, IL. He passed away on March 2, 1974.

She was preceded in death by her parents her husband, two brothers, Nim Gray, and her twin brother Cortez Gray, and a great-granddaughter, Anna Jordan Slaback.

Inez was a member of the Arthur Church of Christ and the Argenta Women’s Club.

Inez had worked at General Electric for several years until moving to the farm and being a farmer and housewife. Later in life she worked as a housekeeper at Fairhaven Nursing Home in Decatur, IL, she then returned to her home in Kentucky where she took care of her mother while also working at the nursing home in Tompkinsville, KY, until she returned to Arthur where she has lived for the past 24 years.

Inez was a very loving and compassionate mother who spent most of her life doing for others. In her younger years she enjoyed her children and her garden. In her later years she loved her church and her grandchildren.

Memorials may be made to the Arthur Church of Christ.

To order memorial trees or send flowers to the family in memory of Inez Smith, please visit our flower store.
Send a Sympathy Card