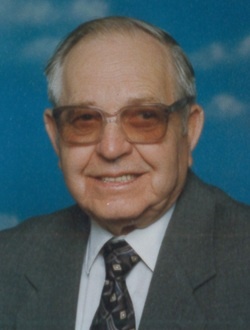 Funeral services will be held at 1:00 P.M. on Wednesday, August 24, 2016 the Edwards Funeral Home, 221 East Main in Arcola, IL. Rev. Don Pankey will officiate. Burial will be in Mt. Olive Cemetery in Martinsville, IL at approximately 3:30 P.M. that same day. Visitation will be two hours before the funeral on Wednesday at the funeral home.

Herschel was a member of the Winebrenner Church of God in Mattoon, IL

Herschel farmed south of Martinsville, IL until 1956. He then worked as a carpenter for Bob Stoltzfus Home Construction for 17 years. He also worked for Ron Miller and Don Wingler.

He liked to go fishing at Lake Major at Camp Maranatha near Ramsey, IL and he was a St. Louis Cardinals fan.

Memorials may be made to the Winebrenner Church of God, 300 Illinois Street in Mattoon, IL or the Mt. Olive Cemetery fund.

To order memorial trees or send flowers to the family in memory of Herschel Nash, please visit our flower store.