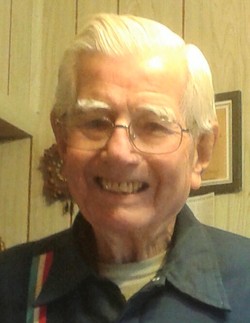 Harvey was born on June 7, 1923, in Humboldt Township, Coles County, Illinois of French and Scottish ancestry, he was one of twelve children born to James H. and Grace L. Dixon Eastin. Harvey had five brothers and six sisters and is survived by his youngest brother, Larry Dean Eastin (Marilyn) of Humboldt, Illinois, and youngest sister, Elyn Eastin Pogliano of Decatur, Illinois.

Mr. Eastin not only lived through the Great Depression and Tri-State Tornado, he was a WWII veteran having served in the Army Air Corp as a combat engineer on numerous South Pacific islands and was preparing for the invasion of Japan. While in the Philippines, he built air fields and hospitals. For over 40 years, he worked "on the road" for the Illinois Central Railroad (which became Amtrak) starting as a fireman on steam engines. For many years before retiring in 1985, he was Engineer of The City of New Orleans (made famous in song by Arlo Guthrie) between Champaign and Centralia. He loved carpentry and busied himself building and renovating homes. He also built a child-sized sanctuary including pews and nursery cribs along with completing many other carpentry projects at the First Christian Church when located at John and Westlawn. Harvey was always available to be of help to his neighbors and friends, and was always a good provider for his wife and children.

To order memorial trees or send flowers to the family in memory of Harvey Eastin, please visit our flower store.