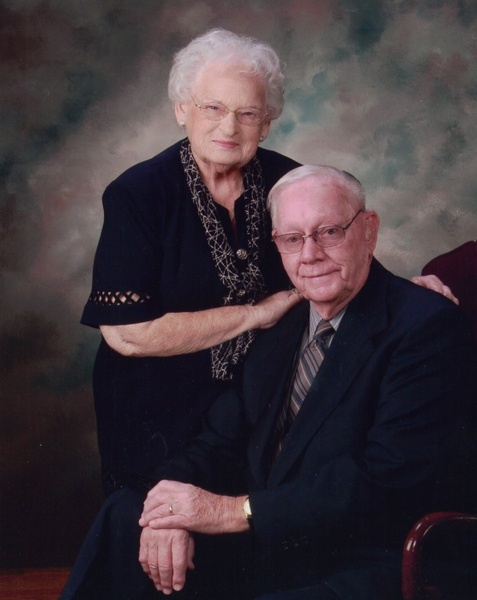 Harold Huffman passed away peacefully due to complications from Covid-19 on December 14, 2020 at the age of 98.    Harold was born in Fayetteville, Arkansas to a big family.   He was a son of Fountain and Gertrude (Jones) Huffman, he was preceded in death by his 4 older sisters and 5 older brothers. He grew up in the farming community of Lovington, Illinois. Where he met and married the love of his life and the person he most argued with, Veda Marie DeVore, in November 1943.

Harold's greatest loves were his family, telling jokes which were mostly un-funny and sometimes not politically correct, and the Army.  He was drafted into the Army Air Corps and served from January 1943 to October 1945.  Upon completion of basic and advanced training as a B-17 Flight Engineer, he was stationed at Deopham Green, England.  As a member of the 452nd Bomb Group- he had the honor of completing 28 combat missions over Germany- mostly without serious incident.  On his final mission, Harold was shot down while in his B-17 "My Darling Lee” and interned as a Prisoner of War in Sweden for nine months.  During that time, he worked on his Swedish, developed a taste for Lederhosen, and had many adventures that would fuel his stories for decades to come.  He returned to the United States in July 1945 and was awarded the Flying Medal, Meritorious Service Medal and Purple Heart.

Upon his return he started work for Decatur Paint and Varnish in Decatur, Illinois and started a family.  Later he was asked to manage a Black and Company hardware store in Rockford, Illinois. He and Veda had 3 children, William Huffman (Delpha, deceased) Susan Edwards (Rick) and Jean Rodriguez (Orlando).  They settled in the Champaign area and managed the Black and Company store on Green Street until his retirement in 1986.  After his retirement he and Veda moved to Mahomet and spent winters in Mission, Texas.    He and Veda enjoyed traveling extensively.

Harold enjoyed wood working, as he would describe "many hours of turning big boards into little boards."  He and Veda also enjoyed camping in their travel trailer.   He would say that both activities helped him get away from the stresses of work.  He prided himself on home improvement projects, and his favorite saying was, "Can I Make a Suggestion?"  He was asked frequently to publicly speak about his POW and flying experiences, which he did up until his death.   Harold occasionally partook in two fingers of cheap blackberry brandy at night before bed.

For the last several years, Harold and Veda lived at Carriage Crossing in Arcola.  Veda passed away in March of 2016.  After that time, Harold was the self-proclaimed most eligible bachelor there.

He was a loving grandfather to 7 grandchildren, Jennie, Dennis, Jody, Michelle, Heather, Andrea and Keith.  He is also blessed with numerous great grandchildren children.

He will be sorely missed.

Private funeral services with Military Rites conducted by the Arcola VFW and the Arcola American Legion will be held on Friday, December 18, 2020 at the Edwards Funeral Home in Arcola, IL.  The Rev. Dr. Jennie Edwards Bertrand will officiate.  The funeral service will be live streamed at 3:00 PM on the Edwards Funeral Home facebook page.  Burial will be held in the Camp Butler National Cemetery in Springfield, IL on Monday, December 21, 2020.
Memorials may be made to the Arcola VFW and American Legion Honor Guard.

To order memorial trees or send flowers to the family in memory of Harold Huffman, please visit our flower store.