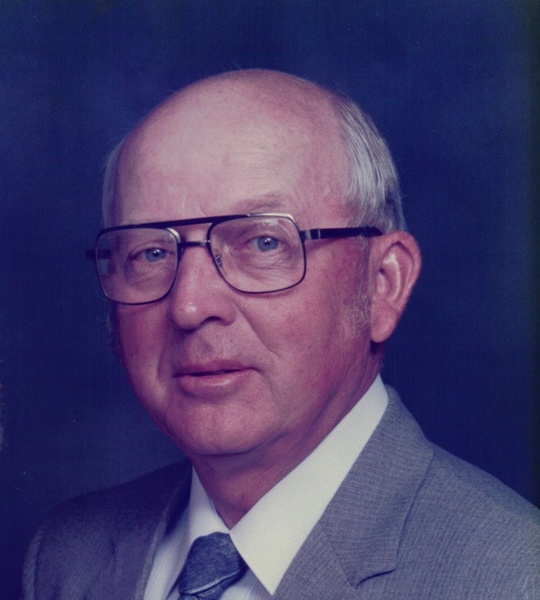 Harold Jones Butler, 93 of Rushville, IL formerly of Arcola, IL passed away at 12:24 P.M. on Wednesday, July 1, at Culbertson Memorial Hospital in Rushville, IL.  At his side was his wife of 66 years, Donna (Carrothers) Butler.

Funeral services will be held at 1:00 P.M. on Tuesday, July 7, 2020 at the Edwards Funeral Home, 221 East Main St., Arcola, IL.  Rev. Brent Budd will officiate.  Burial with military rites conducted by the Arcola VFW and American Legion will be held in the Arcola Cemetery.  Visitation will be held two hours prior to the funeral from 11:00 to 1:00 at the funeral home.  Worthington Funeral Home in Rushville, IL assisted with local arrangements.  The family asks that you please observe all social distancing guidelines and that you please wear a mask.

Harold was predeceased by his parents, his brother Hobart Milton Butler, and his sister Evelyn Mae Atkins.

In 1945 Harold was drafted into the United States Army during World War II before completing his senior year of high school and served in Korea.  After being honorably discharged from the Army at the rank of corporal he returned to Arcola and worked as a farm hand for local farmers and at Koehne Manufacturing in Mattoon, Illinois.  After marrying Donna on November 15, 1953, he worked as a hired man for Myron Whisnand.  (Harold lost his right thumb to the corn picker while at Whisnand’s, and subsequently acquired the name “Grandpa Thumb”.)  He and Donna then moved to the Howsmon farm west of Arcola in 1955 and he began his life-long pursuit of farming.  In addition, he later took on the job of rural mail carrier while continuing to farm.  In 1993, Harold retired from active farming and he and Donna moved to town, and eventually to Rushville.

He was a member of the VFW, Lions Club, and for decades the First Christian Church of Arcola.  He traveled extensively, having been to all 50 states, and absolutely loved farming and gardening.  Harold was a hardworking, Christian man, who taught his children how to live by his example: working every day but Sunday, going to church, and dearly loving his wife and family.

To order memorial trees or send flowers to the family in memory of Harold Butler, please visit our flower store.