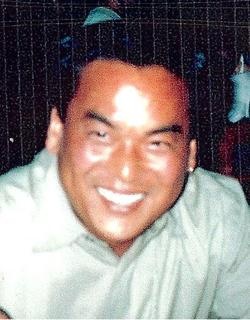 GARRET JAKOBSSON, 46, of Mattoon, IL formerly of Urbana, IL passed away at 6:12 P.M. on Tuesday, November 5, 2013 in Mattoon, IL after years of battling with a neurodegenerative disease.

A memorial service will be held at 3:30 P.M. on Sunday, December 1, 2013 at the Walnut Grove Christian Church, 12930 East County Road 1700 North in Arcola, IL. The Edwards Funeral Home is assisting with arrangements.

Garret was born on April 10, 1967 in South Korea. He was a son of Eric Gunnar and Naomi (Dick) Jakobsson. He married Elizabeth Christian Hudson on October 28, 2002 in Urbana, IL.

He had the biggest smile in the world and like that of the Cheshire Cat it persisted when almost everything else had faded away.

At Garret’s request, NO FLOWERS PLEASE, any memorials or donations may be made to a college fund for his son, Gunnar Jakobsson. Checks can be made out to: Gunnar Jakobsson; Memo-college fund, in care of First Mid Illinois Bank and Trust.

To order memorial trees or send flowers to the family in memory of Garret Jakobsson, please visit our flower store.
Send a Sympathy Card