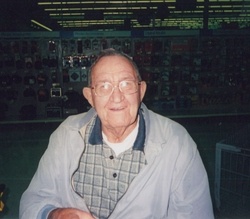 Francis was born on February 1, 1933 in Champaign, IL. He was a son of Francis Fred and Mary Elizabeth (Herme) Blaudow Sr.

He is survived by one sister, Patricia “Patty” Janusik and her husband Kenneth of Tuscola IL, and one brother Jerry Blaudow and his wife Margo of Tuscola, IL, several nieces and nephews and his longtime companion, Loretta Grant of Arthur, IL.

He was preceded in death by his parents, and two brothers, Ralph George Blaudow and Ronald Ray Blaudow.

Francis was a 1951 graduate of Arthur High School.

Francis was an Army Veteran of the Korean War.

He was a member of the Kaskaskia County Club, the Moose in Mattoon, IL and the Arthur American Legion.

He enjoyed golfing, fishing and he was a Chicago Cubs fan.

Francis retired from Progress Industries in Arthur, IL in 1993 with over 42 years of service.

In Lieu of flowers memorials may be made to the donor’s choice.

To order memorial trees or send flowers to the family in memory of Francis Blaudow, please visit our flower store.
Send a Sympathy Card